calaid.co.uk
Home Finance End of the US stock market rally 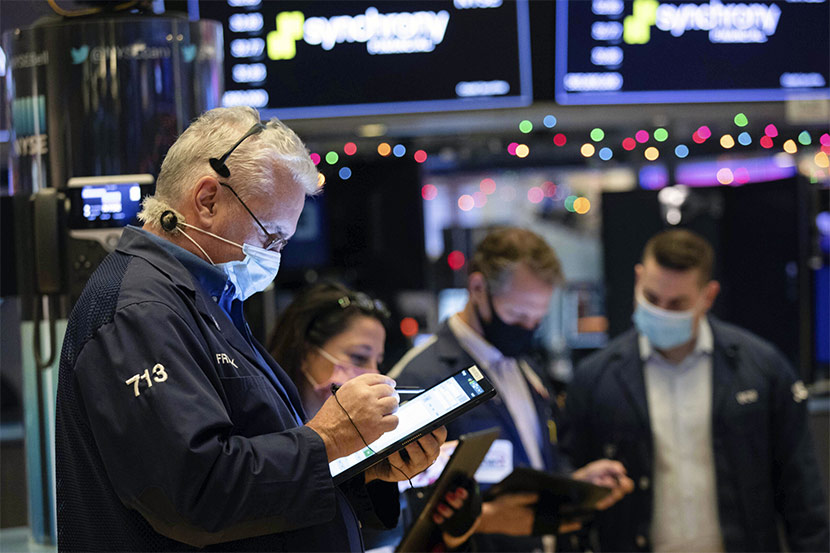 On Wall Street, investors took profits ahead of Fed Chairman Jerome Powell’s speech. The stock market rally that lasted for days is over, at least in the short term. Most recently, the major US stock indices hurried from record to record in mostly small steps – not spectacularly, but steadily. Just yesterday, the S&P 500 and the Nasdaq hit new records. That was the end of today, it was the first day in a long time that no new records could be reported.

On the contrary, all the major indices ended up in the red – including the leading Dow Jones index, which was initially still in the black. At 35,213 points, it was 0.54 percent lighter from trading. The same applied to the market-wide S&P 500 benchmark index, which recently set new highs almost every day. He gave 0.58 percent to 4470 points. The technology exchange Nasdaq, which only rose above 15,000 points for the first time on Tuesday, was also in the red in the end.

The final score was 14,945 points, a daily loss of 0.64 percent. The daily high of 15,059 points was still above the thousand marks, which it had recently overcome. The Nasdaq 100 selection index, most recently on a seemingly never-ending climbing tour, dropped 0.59 percent to 15,278 points.

Again and again the Fed

Of course, the emerging end of the ultra-expansionary interest rate regime of the US Federal Reserve (Fed) on Wall Street was once again the big issue. For most investors it is clear that the “tapering” will start soon, the only question is how and when. “Tapering” is the name given to the gradual reduction of the billion-dollar bond purchases currently being made by the Fed to support the economy. Most stock exchange traders do not expect the actual decision on the exact start of the “tapering” to be made at one of the next Fed meetings, perhaps as early as the end of September. The reports of an explosion at Kabul airport also caused uncertainty. There were many deaths, including US soldiers.

With regard to the further interest rate policy of the Fed, the markets are currently watching with eagle eyes at new economic figures and especially at data from the labor market. The Fed has made tightening monetary policy largely dependent on a recovery in the job market.He took at least a break in the past week. Initial jobless claims – a leading indicator for the labor market – rose by 4,000 to 353,000 a week, as the Department of Labor announced in Washington on Thursday. Analysts had expected an average of 350,000 applications. Nonetheless, the situation on the labor market has improved significantly in recent months. The severe slump during the first Corona wave in spring 2020 has long been overcome. However, the number of unemployed is still significantly higher than it was before the crisis.

The DAX closed weaker today for the second day in a row. Not a spectacular sell-off, but it still became clear that investors are getting more and more nervous. At the end of the day, the leading German index lost 0.42 percent and closed at 15,792 points.This means that the important technical support level at 15,800 points, the breakout level before reaching the record high of 16,030 points, remains competitive. A directional decision has therefore not been made. The daily low was 15,701 and the high was 15,834 points.Concerns about an imminent tightening of US monetary policy, but also economic concerns due to rising corona numbers depressed the mood.

Concerns about the economy and corona are growing

The gloomy export expectations of the German industry in August contributed to the bad news from the German economic front. This is mainly due to the worsening of the corona crisis, including in Asia. The ifo Institute announced that the previously very good mood among exporters had deteriorated noticeably. The ifo index of export expectations fell to 16.6 points after 23.1 in July and 23.9 in June.According to the latest consumer survey by the Nuremberg-based GfK Institute, the consumer climate in Germany has also deteriorated. Rising prices and new corona worries are therefore slowing down the desire for larger purchases. The GfK consumer confidence index fell from minus 0.4 points to minus 1.2 points.

The view in the rear-view mirror is currently more beautiful: According to a study by the auditing company EY, the DAX companies have never earned as much operationally as in the second quarter of this year. A development that the stock market anticipated well in advance and which was and is a decisive fundamental driver for the current record levels. Assuming that the Corona crisis would be overcome, investors took action – which is why every renewed tightening of the Corona numbers also leads to new uncertainty.

VW in front in sales and EBIT

At 45 billion euros, the VW pre-crisis level of 2019 was exceeded by 89 percent in operating profit. Sales climbed by 29 percent compared to the same quarter of the previous year and by 14 percent compared to the same period in 2019.In terms of both sales and earnings before interest and taxes (EBIT), the Volkswagen Group was ahead of the game with 67.3 billion euros and 6.6 billion euros, respectively. VW preferred shares rose slightly against the trend in the DAX.

The rapid spread of the delta variant of the coronavirus also depressed oil prices. However, investors should also take profits after the strong gains of the previous day. The two leading grades, Brent and WTI, lost moderately. Despite the recent price increases – concerns about demand have recently increased again. In Asia in particular, there are burdens from new restrictions on public life.

The gold price also fluctuated today and was recently turned slightly positive to $ 1,793 per troy ounce. Over the course of the week, the yellow precious metal had occasionally ventured above the psychologically important mark of $ 1,800 but was unable to maintain the price gains. The euro is moving a little more easily at $ 1.1751. The European Central Bank (ECB) set the reference rate at 1.1767 (Wednesday: 1.1736) dollars.

Delivery Hero is slipping deeper into the red

Delivery Hero shares also had to give up and ranked at the end of the DAX. The food delivery service has to dig a little deeper into its pockets for its sustained strong growth and expansion. In the first half of the year, there was a loss of almost one billion euros. A year earlier, the minus was just about half as large at just under 448 million euros.