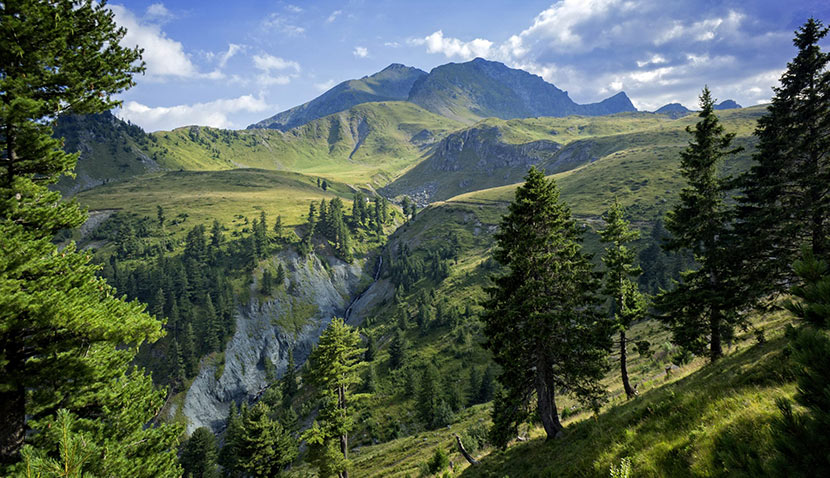 The road from Sarajevo through the Bosnian mountains and gorges has been cleared of snow. Spring has broken out in the “black mountains” of Montenegro and the Serbian Sandžak. The journey goes along breathtaking gorges and rocky abysses, down towards Raška and Kosovo, to the blackbird field. A narrow, two-lane road leads to the border.

Before the Kosovo War of 1998/99, there were no border installations here. At that time Kosovo was a Serbian province with a majority Albanian population. After that, the country was under the protectorate of the United Nations. Since 2008, when Kosovo declared its independence, European police officers and international KFOR troops have been controlling the border.

The old road littered with potholes leads along the river Ibar through a mountainous and sparsely populated landscape. Only now and then does an Orthodox church tower over the tops of the trees. Only Serbs live in this region of Kosovo, 40,000 are said to be. The area is therefore to be added to Serbia according to the plans now being discussed. At the same time, it is planned that the area around the city of Preševo, which is inhabited by Albanians in southern Serbia, will become Kosovar.

The road leads past small villages to Mitrovica, 30 kilometers away, a city divided between Albanians and Serbs. In the northern part of Serbia, there are also many posters with the image of Vučić, but Russian President Vladimir Putin can also be seen. The Kosovar Serb Tatjana Lazarević can explain why the people are so unwilling to talk: “Here in the north, Vučić and his party have complete control over the people, especially in the countryside,” she says.

Ardian Arifaj, advisor to the president of Kosovo – “Now there is a momentum to which we have to react real politically”

The phone in her small office of the non-governmental organization called Razvoj Zajednica (“Center for Community Development”), located near the centre, keeps ringing. Tatjana Lazarević has tied her blonde hair in a ponytail. She runs a news portal with her fellow campaigners, examines press releases for their truthfulness, exposes fake news, and opposes all ideologies.

And Lazarević is angry about the idea of ​​a border shift. In the Serbian communities around North Mitrovica, the Serbian people would support whatever the strong man in Belgrade says. “But the majority of Kosovar Serbs live in nine enclaves in the south. She doesn’t want that, it’s about her existence. The Orthodox Church is also against it. ”Lazarević hopes for resistance and the opposition demonstrations against Aleksandar Vučić that have been going on for months in Belgrade.

Life in the Serbian north of Mitrovica is not pulsating. The street lighting fights against the foggy evening with no luck. Lazarević’s office is barely 500 meters from the infamous bridge over the Ibar, which remained hotly contested for a long time after the war. The river crossing is closed to traffic to this day. Tatjana Lazarević points to the river. The state border would run along with it if there was an exchange of territory, she says.

Where the upswing changes the country

There is a second bridge over the Ibar. And it’s open and busy. It leads to the Albanian southern part of Mitrovica. Here the buildings on the newly built expressway that leads to the capital of Kosovo, to Prishtina, shine in a glaring light. Brightly lit gas stations, shopping malls, and warehouses of building materials. Furniture stores alternate with hotels and four-story apartment buildings.

Where before the war meadows and fields surrounded the small, scattered villages, a 40-kilometer-long American Strip City has now emerged. The obtrusive capitalist aesthetic acts like a political statement. It is as if the Albanians of Kosovo were showing the Serbs what they have done since the country gained independence in 2008.

Prishtina has become a dynamic city that is expanding in all directions. Traffic is regulated, a new motorway junction makes it easier to enter the city, which is now inhabited by more than half a million people. Construction is going on everywhere, new skyscrapers have condensed into a handsome skyline.

Ardian Arifaj has his office right next to the President of Kosovo, Hashim Thaçi. The newly built complex with parliament and government buildings was destroyed by NATO missiles in 1999. “The skyscraper of the Serbian Ministry of the Interior, the secret service, was the first target,” says the bald Arifaj. In Serbian times he was the editor of the daily newspaper Koha Ditore , which reported remarkably critical reports despite all the restrictions. After that, Arifaj made a name for himself as a political analyst in the context of civil society organizations. Three years ago he surprisingly advanced to the position of advisor to the President. Thaçi tries to bring unencumbered intellectuals into his environment in order to get rid of the smell of only employing the old guard of the Kosovo Liberation Army UÇK.

Ardian Arifaj confirms the negotiations between Thaçi and Serbian President Vučić about an exchange of territory. The talks have come a long way. He also confirms Russian and US support for this plan. The political coordinates have changed after the election of US President Donald Trump, explains Arifaj. He wrote to Thaçi in December 2018: “If it is not possible to take advantage of this unique opportunity, it would be a tragic setback, as there will hardly be another chance for a comprehensive peace again soon.” Thaçis’ adviser repeats the statement almost verbatim. He is behind the plans to move the border.

At the end of the negotiation process, Arifaj describes his hope, there could be diplomatic recognition of Kosovo by Serbia and Kosovo’s membership in the United Nations. “Now there is a momentum to which we have to react real politically,” says Arifaj. The position of Germany, however, worries him. Last year, Angela Merkel declared at a conference of foreign ministers that the territorial integrity of the states of the Western Balkans is inviolable. Great Britain, Spain, Sweden and other EU members also resisted border changes, Arifaj complains. After all, the EU foreign affairs representative Federica Mogherini has meanwhile turned around. Arifaj hopes that Germany’s position will be softened at the Western Balkans Conference in Berlin at the end of April.

The well-known journalist Evliana Berani, on the other hand, hopes for the opposite. There are only rumors, nothing tangible, she says, but not an open social discussion about this question.

“What Thaçi and his people are up to is a pure breach of the constitution,” says 73-year-old Jusuf Buxhovi. The author of non-fiction books about the region was a co-founder of the Democratic League of Kosovo in 1991 and a supporter of the first Kosovo president, Ibrahim Rugova. Border changes on an ethnic basis would destabilize Macedonia and Montenegro, where there are strong Albanian minorities, he feared. “Not to mention Bosnia at all.” No country in the region has an ethnically uniform population.

In the Serbian enclave of Gračanica

The road towards Preševo ​​Valley, 100 kilometers away, passes through Gračanica. The small town and its surroundings represent a Serbian enclave in the midst of the Albanian majority population, around 25,000 Serbs live here. New houses have been built and trees have been planted. The city has recovered in recent years, the Serbian community is self-governing. The monastery built in the 12th and 13th centuries with the unique church in Serbian-Byzantine style is considered an attraction among tourists who come here. Albanian families and foreigners from the numerous international organizations that have their headquarters in Kosovo also cavort in the restaurants.

40-year-old Nemanja Jovanović was born here. He experienced the troubled years of the war as a teenager, then studied law in Serbia and North Mitrovica. Subsequently, the lanky and easy-going family man got involved in various non-governmental organizations. “Now everyone is confused, they don’t know what to think,” says Jovanović, describing the reactions to the envisaged border shift. Should the north of Kosovo come to Serbia, the Serbs would be left alone in the enclaves – because they would remain part of Kosovo. “A lot of people will then emigrate, then there will be no more future, they think.” He is undecided about his own.

Preševo, in a future part of Kosovo?

The road leads along a reservoir and the picturesque hills around Novo Brdo, a mine where the Romans mined gold and silver. It winds up a pass, the height of which represents the eastern border between Kosovo and Serbia. Again over the border to Serbia, an easy undertaking. But Albanians are not allowed to cross the border in their car.

The café on the main square is full, the latte macchiato is excellent. The 60-year-old Buzar Kadriu was a guest worker in Western Europe 30 years ago; now he is employed as a plumber and heating engineer. He is fine, the border shift is only causing unrest. “You’re the first to ask what I think about it,” he says. None of the politicians on both sides asked the population. He looks at the passing military vehicles of the Serbian army. “Despite everything, we Albanians and Serbs get along well here.”

The best time in his life was the time in socialism under Yugoslavia’s head of state Josip Broz Tito. “There was no nationalism and no borders between the republics.” One should wait until both states, Serbia and Kosovo, were accepted into the European Union. “Then the borders will fall again anyway,” hopes Buzar.

The Shabani couple reacts in a very similar way. You have an exchange office with a photo shop on the main street and are worried about your pension. “What can you do with 80 euros per month that are paid in Kosovo? Here in Serbia the pensions are much higher. ”And what about the health system, the school qualifications and diplomas of the children? A customer interferes. “We have a Serbian passport here and can travel. The Kosovars have to apply for a visa to Germany for six months. ”

Only a young gold seller in the shop next door comes out as an Albanian patriot. In contrast, two Serbian students reject any idea of ​​an area swap. “This is Serbia. It’s all just talk of the politicians. There will be no exchange of territory. ”

Or is it? On the way back to Sarajevo, Svetlana Lazarević from North Mitrovica wants to know what the people in Prishtina and Preševo ​​think. She is upset that the heads of the population on both sides are being negotiated. She is worried about the existence of the Serbs in the country. “In northern Kosovo, people are in favour of secession from Kosovo, but if the plan were implemented, the Serbs would be left alone in the southern enclaves. And this meant the end of Serbs in Kosovo. ”

Vacation without a plane? Stay on the ground