calaid.co.uk
Home News The Amazon became a no man’s land 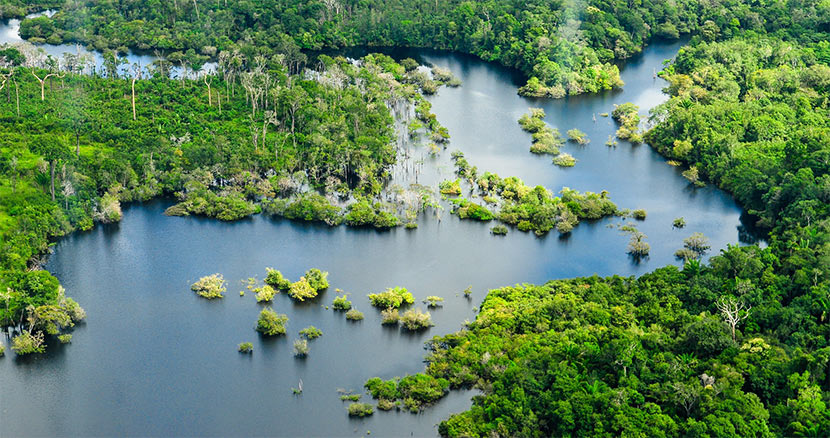 According to a new study published in Nature and led by Gatti, today the Amazon rainforest releases more greenhouse gases than it can absorb. In dialogue with Brecha, the researcher breaks down the scope of this finding and explains how it came to this.

Luciana Gatti is a Doctor of Science, a specialist in Atmospheric Chemistry, and coordinator of the Greenhouse Gas Laboratory of the National Institute for Space Research of Brazil, known as INPE by its Portuguese acronym. In a study published in Nature last week, 1 the team of 18 scientists she leads concludes that between 2010 and 2018, as a result of deforestation, the Amazon began to release more carbon dioxide into the atmosphere than it absorbs. Based on the measures taken in the last two years and the recent clearing data discussed in this interview, he affirms that this phenomenon is worsening at a dizzying rate.

Let’s go to the data first: you verified that the Amazon today is emitting more carbon than it can absorb. What does this mean and how was it discovered?

What we found is that the Amazon now emits more than it absorbs, due to the clearing and burning. It is not that the jungle stopped absorbing and began to emit, but that it continues to absorb, but less than before. It is warming and more trees are dying. In our study, we measured the atmospheric concentration of carbon dioxide (CO 2 ) in four regions, using airplanes, for nine years, twice a month. Through the use of carbon monoxide, we manage to separate the CO 2that comes from the fire and analyze the rest. This methodology allows us to see all the processes that are occurring in the Amazon: emissions from land clearing, burning and tree mortality. By adding, for example, samples from two of the referenced Amazonian areas, Pará and the north of Mato Grosso – which are two regions that represent a total of 2 million square kilometers and have a clearing of more than 30 percent of their surface – We saw that they emit ten times more carbon than the western region, which has an average clearance of 11 percent.

There are also quite deforested areas in the states of Rondonia, Acre, and in the southwest of the state of Amazonas, but most of the preserved areas are concentrated in that region. At the total level, the Amazon releases an average of 300 million tons of carbon per year: emissions from burning are 400 million tons and the jungle manages to remove 100 million tons. This enormous release of carbon that results occurs largely because land clearing is highly concentrated, especially in regions where there are more facilities to remove production, such as roads and ports.

How do you get to the current situation?

The air masses that come from the ocean enter the Amazon from the northeast, bringing humidity and generate precipitation. But then a replacement of water to the atmosphere is required. The evapotranspiration of the trees plays an important role here: it is estimated that it represents between 25 and 50 percent of the water replacement. Therefore, by deforesting we cause that there is less rainfall in that place. And we make the temperature rise: to become steam, water absorbs energy, which cools the environment. If trees are missing, the temperature rises, and, at the same time, the rains decrease. This puts the typical trees of the humid tropical forest now under very great stress, which reduces their photosynthesis and increases their mortality. In the region studied that presented the highest monthly temperature increase,

So, the trees not only die from the clearing itself, but also as an indirect consequence of that process …

-Exactly. The wasteland represents a direct and indirect source of emission. It makes the weather very stressful for rainforest trees that have not yet been cut down or burned, mainly during that peak of the dry season which is August, September, and October. We study 40 years of rain, month by month. What surprised us was how much those months have changed. We saw that the amount of rain that is lost roughly corresponds to the extent of the clearing. The northeast of the jungle has an average of 37 percent of clearing, which caused a reduction of rainfall in those three months of 34 percent. In the southeastern part, which is 28 percent deforested, the loss of rainfall in this period was 24 percent. That was the region where the temperature rose the most: two and a half degrees. In addition to emissions from clearing and burning, which is already much higher than what the Amazon is capable of absorbing, in the southeast region there are now more trees dying than growing. All that matter continues to emit carbon, but the absorption is already lower. In the rest of the regions, the forest still absorbs more than it emits by itself, but it is still insufficient when the emission of burning and clearing is taken into account.

If the scenario doesn’t change, the tendency is that they all end up like the Southeast region?

Exactly. In nature everything is interlinked, and although sometimes we do not understand its processes, they do occur. I like to use the domino analogy: the guy over there setting fire to see that many trees and thinks, “I’m going to burn and grab a piece of the earth here for myself; With so many trees, what is the problem? ». He is the one who sees the first domino: he goes and cuts. The other one who’s been there for a long time knows that regions with more logging have less rain. This, despite not being a scientist, observes nature and already understands the second card. The specialists who study the matter are looking at the third file, and we have just discovered one more file, one that the scientific community itself was not aware of. What our studies show is that the region with the most deforestation registers a carbon dioxide emission ten times higher than the region with the least deforestation. This is going to have many consequences, some of which we cannot even imagine.

What could be some of those consequences for the continent and the world?

The Amazon is contributing to the acceleration of climate change not only by emitting carbon into the atmosphere but also by reducing rainfall and increasing temperature. We are leaving the vegetation more susceptible to fire, more flammable, and this is getting worse every year. They are two processes that occur simultaneously: regional deforestation and global climate change. The Amazon could be our climate protection: a climate buffer that could ease all these changes by emitting huge amounts of water into the atmosphere and thereby help cool the planet. But we are doing the other way around and preventing that process. The first to feel the negative effects is Brazil, but the impacts will reach all of South America. They are and will also be arriving in Uruguay. Nature has no limits, walls or borders. In the last three years, we have seen how clearing and burning records are broken over and over again, how new records are reached for lack of rain and high temperatures, with uncontrollable fires. These factors are enhanced in a vicious circle. Today in Brazil, at the level of environmental policies, we are doing exactly the opposite of what we should do.

This week some data was published: according to the Amazon institute, in Belém, the rate of clearing grew 51 percent in the last 11 months, and a study by the Federal University of Minas Gerais revealed that, during the first two years of the government of Jair Bolsonaro, 93 percent of the environmental fines were not paid. What is the impact of this?

The agribusiness wants more land to plant and therefore deforests the forest. But he shoots himself in the foot. In the future, you will be the first to be affected by the wrong decisions that are being made now. Most of that clearing, on the other hand, is illegal. As the message that comes from above is that there are no fines or there is no reason to pay them, everything that we had advanced in environmental protection is being lost and a few criminals are profiting and having a party. The Amazon became a no man’s land. It is the maximum expression of savage capitalism: in the name of profit, anything goes, destroy the environment, destroy wild species and animals, ecosystems rich in biodiversity.

It is a civilizational setback and the whole of society ends up paying the bill. We cannot decouple land clearing from the water crisis we are going through this year, for example. And, above all, the great solution that is coming to the energy crisis, worsened by the water crisis, is to privatize the energy production system and force by law to build a minimum percentage of gas-fired thermoelectric plants (see «Pay to sell », Brecha , 25-VI-21). The whole world is thinking about how it is going to stop using fossil fuels and Brazil is going in the opposite direction. They want this country to be the world’s great farm, exporter of meat and grains, but they forget that this country has wonderful productivity in this area because it has a wonderful climate. And, if we have a wonderful climate, it is because we have the Amazon. We are killing the goose that lays the golden eggs for ignoring science.

“Is this situation reversible?

“It’s hard to say yes and hard to say no.” Because of the domino thing. Now that we know what happens, let’s imagine the opposite: let’s dream that burning from July to November will be prohibited, that a moratorium of at least five years will be imposed with zero clearance and fierce control, and that there will be forest recovery projects in the most affected areas.

It is enough that we stop burning it and disassemble it so that the Amazon begins to absorb more carbon. There the situation would at least stop getting worse. The jungle would regenerate, and with reforestation, we would have more trees to evapotranspire and help reduce the temperature. Year after year we would have more favorable conditions for the jungle to grow. But it’s about pushing the dominoes to the other side. We can’t not try.